You are here: Home / Carol Williams / The Healing Corner

Joyce Meyer’s book, God’s Greatest Gifts, His Word, His Name and His Blood, has a lot of God’s truth from God’s Word in it. This month I would like to share what she wrote about His Name. 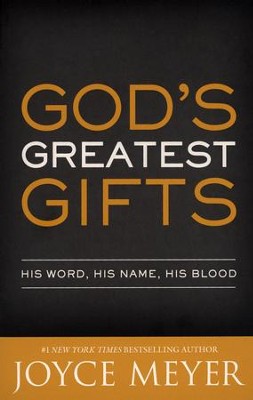 In Philippians 2:10 Paul writes, “That in (at) the name of Jesus every knee should (must) bow, in heaven and on earth and under the earth.”(The Amplified Bible)There is so much power in the name of Jesus. We need the Holy Spirit of God to give us a revelation about the power that is in the name of Jesus. We need to pray and ask God for this revelation of the power in His name.Joyce tells us:“Praying in the name of Jesus takes the pressure off of us! His name takes His place, His name represents Him. When we pray in His name, it is the same as if He were praying, as if He were asking!Even to digest this wonderful truth we have to meditate on it over and over again and again. This is a privilege that seems almost too majestic to believe! Dare we believe such a thing? We can believe it, because we have Scripture to back it up and we must believe it, for the sake of the continuation of His work in the earth. Unless we pray in faith using Jesus’ name nothing will be accomplished to further the Kingdom of God in this world.”We read in Acts 3:1-6:“Now Peter and John were going up to the temple at the hour of prayer, the ninth hour (three o’clock in the afternoon),When a certain man crippled from his birth was being carried along, who was laid each day at the gate of the temple [which is] called Beautiful, so that he might beg for charitable gifts from those who entered the temple.So when he saw Peter and John about to go into the temple. He asked them to give him a gift.And Peter directed his gaze intently at him, and so did John. And said. Look at us!And [the man] paid attention to them, expecting that he was going to get something from them.But Peter said, Silver and gold (money) I do not have; but what I do have, that I give to you; in [the use of] the name of Jesus Christ of Nazareth, walk!”As we read further to verse 7 we know that the crippled man was all healed. Peter and John had to have the revelation of the power in the name of Jesus. They used that power and so must we.As Joyce writes, “It is up to us to use the name of Jesus, use the power of attorney that He has given you. The name of Jesus is one of the major weapons with which you defend yourself and attack the kingdom of darkness. Your hope is not in yourself, it is in the power of His Word His name and His Blood.”Next time, let’s take a look at what Joy