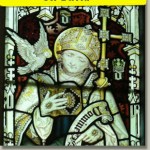 David was born close to the present day city of St. David’s in Western Wales.  His mother, Non, was running from the local chief who wanted to kill her.  In the midst of a terrible storm Non gave birth to David in a field.  Tradition has it that, as David was born, lightning struck the ground nearby and a spring of water gushed out.  To this day it is considered a place of pilgrimage and said to be especially good for healing eyes.

David was educated at Whitland in Carmarthenshire by St. Paulinus of Wales, a hermit.  Whitland was a Cistercian Abbey older than Tintern Abbey. Paulinus was a preserver of the faith, constant lover of his country, champion of righteousness.  Paulinus died on November 23, 505 A.D.

David visited Glastonbury Abbey and donated to it a Sapphire Altar.  It was during the time of Henry VIII that the Altar was taken away.  It is believed that the sapphire is now part of the crown jewels.

David founded numerous monasteries and was a just and fair abbot.  He was referred to as the “Waterman,” as he would only allow his monks bread to eat, and water instead of the usual mead or beer to go with meals.  Some also say that David would immerse himself in a tub of cold water as a form of spiritual discipline.

David is said to have lived to be over 100 years old and died on Tuesday, March 1, 589 A.D.  He was buried in the church he founded at St. David’s in Glyn Rhosyn.  This is the location of the present day Cathedral of St. David’s in St. David’s Wales. David was canonized by Rome in 1123 A.D.

Tradition has it that the final words of St. David were “Be joyful and keep your faith and your creed.  Do the little things that you have seen me do and heard about.  I will walk the path that our fathers have trod before us.” David of Wales 589 AD

Nearby on the sea coast are the ruins of a chapel associated with Non. Non’s relics were destroyed during the Reformation.